A reliable broker, online signals and a robot!
Better together than separately!
Start earning money
LINK

How to use COT-charts to trade binary options?

Schedules Commitment of Traders is one of the most effective tools in trading for determining the so-called "participants' mood" in the foreign exchange market. Just think, you can accurately determine the direction of the real trend, see where both large and small investors are aiming to understand what real amounts of money are behind the price. Thus, given these reports in your strategy, you significantly increase your chances of success, as you act on the fundamental laws of supply and demand. Personally, I always preferred to act for sure, I think and you will very useful information on this tool. Let us consider in more detail the aspects of application.

The first step is to understand the significance of these data in the report chart. Take for example the Russified version. 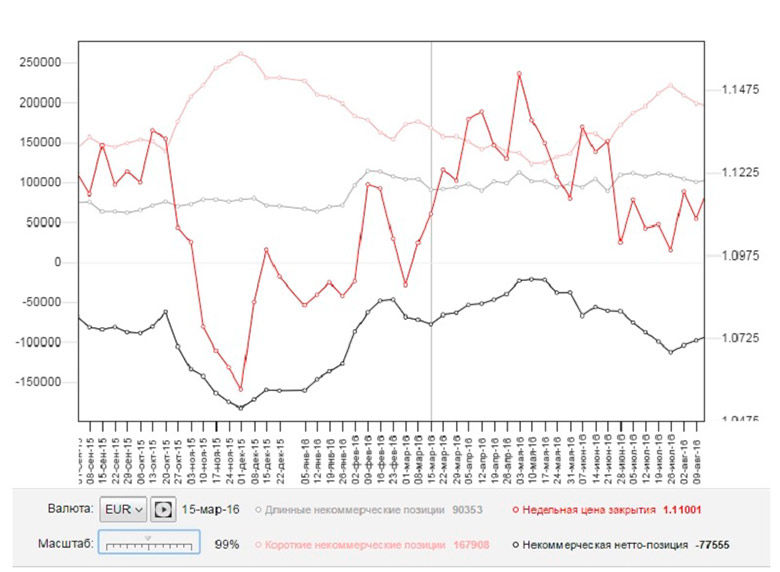 Chosen currency EUR - this means considering the pair EUR / USD, as all COT-charts are built with respect to the US dollar. Further, similarly accessible: GBP, JPY, CHF, AUD, NZD, CAD.

Step to plot (with data points, the date of publication) - 7 days, which suggests the possibility of using longer-term forecasts than in the day.

Let's look at an example from December until May 2015 2016, the impact of the volume of the positions of noncommercial traders. 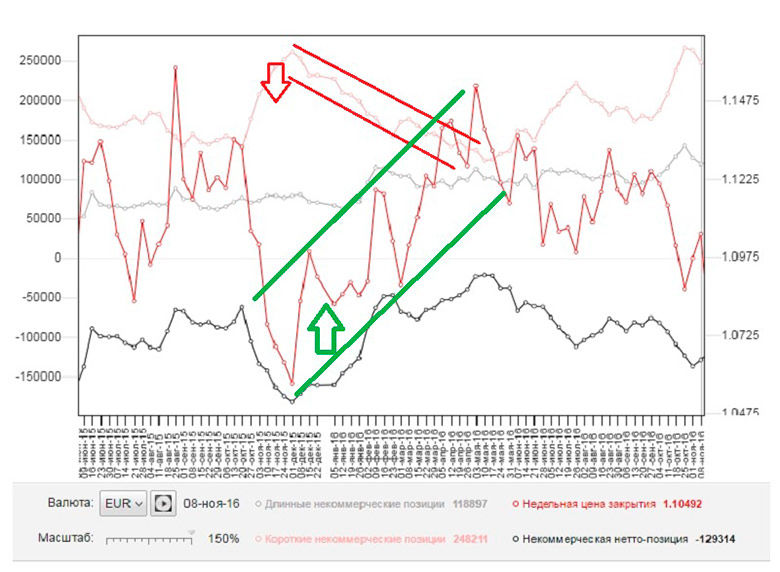 As can be noted the upper translucent red line (short positions) reached its peak and began to fall together with him began EURUSD traded higher and higher with at 1.0566 1.1523. In this global balance position it was also in favor of the bears, but the trend changed to the local bulls.

Despite the fact that the COT charts used in more long-term and medium-term investors, the trader received information binary options gives an idea of ​​the most likely movement within the trading day.

A common use case in Option Trading

The main idea for the application of this tool is the signal filter. Suppose your strategy is based on finding stable trends within the trading day. Here is the most typical method of using COT-graphs by most traders (not the most effective, but in many cases it works). From recent reports, we see that 6 December 2016 released data with a lower number of short positions, not taking into account the global bearish trend. Thus, we conclude that during the day and throughout the following week, upward impulses are likely. Consider the situation on the chart EURUSD M1, for example, 8 December.

As you can see, were really powerful moves from buyers. Our attempts to buy PUT option would not have been too successful. However, filtering the signals on the COT schedule, we would have a handsome profit while avoiding many false attempts to enter the transaction.

It is worth noting that almost all week EURUSD was with 6 December consolidation and made a sharp leap upwards, but in recent days 2 still very low down. At that time it was more profitable to be in short positions. The reason is that the global trend takes its. I analyzed the long-COT reports, and below will offer you a more efficient method of analysis.

Let's start from the beginning. Initially we estimate the global trend in the last year on the Eurodollar - it is an obvious short. I prefer to work on the market only in "severe days" when there is a growth of short positions, or better yet a simultaneous reduction of long positions. Absolutely ideal conditions are rare, but worth it. For example, reports 5 and 12 2016 year in July created a good move down throughout the week. As an illustration of the stated schedule, so that you can assess the trend during the week.

Thus, I trade is always in the direction of a global trend with an increase in short positions (it is a prerequisite), and vice versa. When in those days also reduced long positions, it is an even stronger signal.

There are days when trading is not necessary at all. You have to be careful, because at some point the market can be unpredictable. For this purpose, SOT-charts should show a decrease and increase in short positions with long global trend down (and vice versa).

COT Charts - this is an excellent filter for signals in your trading strategy, which will significantly increase the percentage of winning trades. Reports only work on USD currency pairs. Published every 7 days makes it possible to evaluate only the medium-term and global trend, but this is quite enough.

It is recommended to only use the COT signals that will enhance your entry into the position. In other words, the growth of short positions in a bear market, and vice versa in a bull market. I wish you a stable profit!

Trading strategy on the reporting calendar

Practical application of the correlation of currencies in trading binary options