What is BMI and how to calculate the Big Mac Index? Why was this particular McDonald's product taken as the basis for some economic calculations? Is the Big Mac Index applicable for Forex market analysis? I wrote an article that answers all of these and some other important questions.

To assess the economy of the state as a whole, many complex indicators and terms are used: inflation, denomination, GDP, employment, and many others. Using all this data, economists determine the quality of life of ordinary citizens. These terms are difficult for ordinary people to understand. Is there an easier way to measure purchasing power? Yes, and it was featured in The Economist back in 1986.

What is the Big Mac Index?

Big Mac Index (BMI) is a special parameter used to determine PPP (purchasing power parity). BMI is based on the theory that the prices of a basket of similar goods of two countries are compared to calculate the real exchange rate. For example, in a Russian supermarket they spent 500 rubles on the purchase of bread, milk and meat. To buy identical products (in the same quantity) in a US supermarket, they spend $ 25. The fair exchange rate for the dollar to the Russian ruble is equal to the quotient of dividing the amount spent in the Russian Federation by the amount spent in the United States. That is, the required value is 500/25 = 20 rubles.

The PPP theory says that identical goods in different countries should cost about the same. Based on this equality, a "fair" exchange rate is calculated. Additional parameters (the level of income of citizens of the state, the cost of transporting products, and others) are not taken into account.

The economists who proposed the Big Mac Index replaced the shopping cart with the single most popular product around the world. Why was the Big Mac taken as the basis for the calculations?

There are two reasons. Firstly, restaurants of the famous fast food chain are located in almost every country in the world. You can buy Big Macs in any of them. Secondly, the composition of this product includes such a quantity of food components, which is sufficient to consider it a so-called mold of the national economy. Big Mac has meat, bread, cheese, vegetables. The Big Mac index is a convenient way to determine the discrepancy between the values ​​of the currencies of countries with similar income indicators (especially in times of crisis). It clearly demonstrates how expensive currency is for the country's economy.

It is noteworthy that for a long time many economists did not know how to calculate the Big Mac index to assess the "fair" value of the Indian rupee, since in this country, for obvious reasons, it is impossible to buy a burger with a beef patty. A compromise decision was made in 2011: the index is calculated on the basis of Maharaja Mac - a product containing chicken instead of beef.

The McDonald's chain of restaurants and their signature product (Big Mac) appeared in the United States. For this reason, the US dollar is used as the reference currency when calculating the index. The BMI calculation formula contains only two parameters and looks like this:

For example, 1 Big Mac in the Russian Federation can be bought for 150 rubles, and in the USA - for 6 dollars (prices are taken conditionally for ease of calculations). BMI is 150/6 = 25 rubles. That is how much one US dollar should cost. The actual exchange rate (at the time of this writing) was about 76 rubles per US dollar. The difference of 1 rubles indicates how underestimated the national currency of the Russian Federation.

The calculation is as simple as it involves several assumptions, including that the shipping cost of any Big Mac ingredient is zero to ensure that the product is equivalent in any country. This is how the degree of underestimation or overestimation of a particular currency is determined (based on the theory of purchasing power parity). The above example clearly demonstrates that the Russian ruble is undervalued against the US dollar by more than 200%.

Впервые Big Mac index was calculated in 1986 in a comic form. The idea belongs to the representatives of the British magazine "The Economist". Its essence was to visually demonstrate the unfairness of the exchange rates of some countries, which, from the point of view of the PPP theory, are overvalued or undervalued. The McDonald's network in 1986 was not very developed, so the list initially included only 15 states. The most popular McDonald's product at that time in the United States cost $ 1.

The first McDonald's restaurant in the Russian Federation was opened in 1990. Since then BMI has been determined for the Russian ruble as well. It is noteworthy that for 1 Big Mac it was necessary to pay 3,75 rubles (about 6,2 dollars at the then exchange rate). The price of this product in the United States managed to rise to $ 2,1. From this it can be concluded that in 1990 the Russian ruble was greatly overvalued. In subsequent years, the difference between the value of the ruble and the dollar decreased. In 2019, the Russian ruble (based on the same calculations) was recognized as the most undervalued currency.

Another way to use BMI is to compare the cost of a popular burger with the minimum hourly rate adopted by the state at the legislative level. After examining the available data, it can be concluded that the average French or German earns about 2,5 Big Macs per hour of work. At the same time, a Spaniard or a Pole earn almost 2 times less - about 1,3 Big Macs. Based on these values, it is possible to estimate the difference in purchasing power of the citizens of the above countries.

How to use the Big Mac index for Forex trading

The main purpose of the BMI is to simplify the understanding of complex economic processes taking place in various countries and to give an objective assessment of what is happening in the world economy. Nevertheless, this indicator is successfully used for forecasting exchange rates. Most often BMI is used to calculate the number of Big Macs that can be bought in a particular country for a certain amount of money, for example, $ 100. This number can either increase or decrease. In the latter case, this indicates two possible phenomena:

There is a hypothesis that a significant difference between the real exchange rate and the one calculated on the basis of BMI will flatten over time. But in practice, this hypothesis does not always work.

From the point of view of traders, the Big Mac index has the following features:

Try to calculate the Big Mac index for the currencies you are interested in and draw conclusions about whether they are undervalued or overvalued. You can track BMI changes using special tables and graphs, which I will discuss below.

Table of courses by the Big Mac index in 2020

On the website of the publishing house "The Economist" you can find all the information about the "real" value of national currencies of many countries of the world, taking into account the current prices for Big Macs. The Big Mac index (table by country) is presented below. 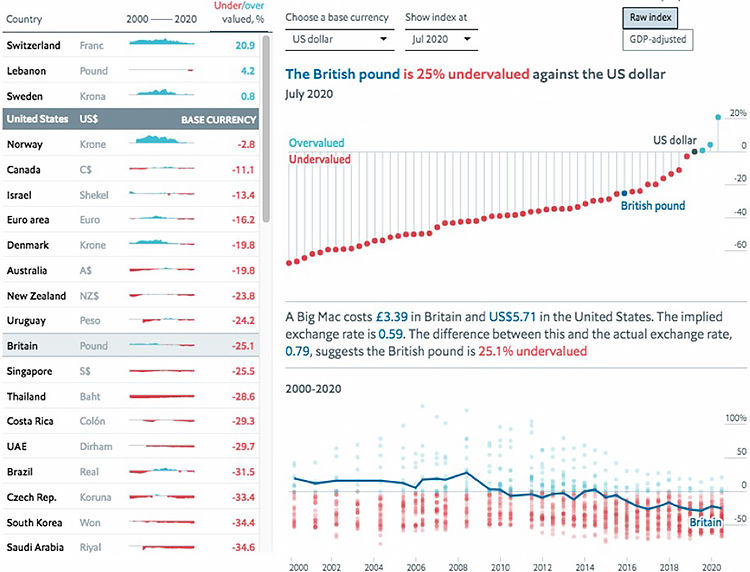 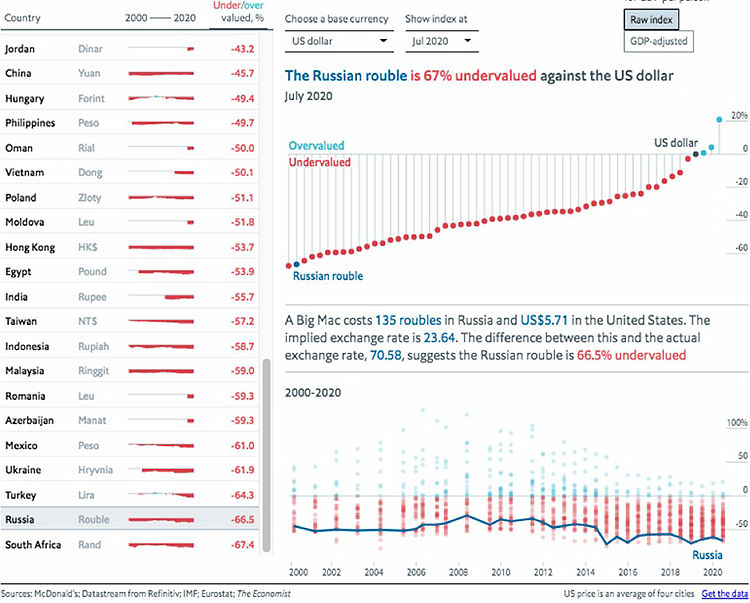 As you can see, the last calculations were carried out in July 2020. At that time, the cost of a burger in the Russian Federation was 135 rubles, and in the United States - 5,71 dollars. The results show that the "real" exchange rate should be 23,64 rubles to 1 US dollar (the actual exchange rate at that time was 70,58 rubles to 1 dollar). As a result, we have: the Russian ruble is undervalued by 66,5%.

Purchasing power parity is determined based on other popular products from other companies. But, Big Mac index remains the most popular.

Here are some indices competing with BMI:

In addition to those listed above, there are many different indices that allow you to assess the economic situation without resorting to complex calculations. However, due to its popularity and prevalence, it is the Big Mac that is taken as the basis for calculations.

Criticism of the Big Mac index

The Big Mac Index cannot be considered an accurate indicator for various reasons:

For African countries, the KFC index was introduced, the main competitor to McDonald's, which is more popular with local residents. KFC restaurants are open in more than 20 countries on the black continent. Therefore, the cost of a KFC bucket is used to compare the purchasing power of blacks with those of Europe and America. This index is also not very accurate for the reasons listed above.

Although the Big Mac index shows the economic situation in the world with some degree of accuracy, it is not recommended to take it seriously. He neglects many factors that affect both the purchasing power and the real value of national currencies, including GDP, political situation, and more. Some states artificially understate the value of some imported goods, including those used as burger ingredients.

On the other hand, BMI provides a unique opportunity not only to look at the "real" exchange rates, but also to predict their possible changes in the future. This feature of the index is more useful for people far from the economy. In addition, by correctly comparing BMI with other economic indicators, it is possible, with a certain degree of accuracy, to estimate the difference in the cost of goods and services in different markets, and to determine global changes that affect pricing.

More visual information about the Big Mac index can be obtained by watching the video:

Where to get paid indicators for free: making money from scratch

Binany - a promising platform for working with binary options