What will the euro rate be in 2020? Expectations for Change

Financial analysts are confident that in 2020 the global economy will show impressive growth. The risks of global trade will be minimized, and a single European currency will grow stronger. The central banks of the EU countries, as well as the economic situation in the United States (as the most popular currency pair is meant), have the greatest influence on the euro exchange rate online. EUR/USD) Both that and other group of factors testifies to the forthcoming strengthening of the European currency. Consider the situation in more detail.

Over the past two years, the euro has shown steady trend to decrease:

Such a moderate devaluation creates certain advantages for exporters of the euro area countries, but worsens the situation of states that are net recipients of subsidies from the European unified financial system. And now, in order to maintain a balance of interests within the EU, the time has come for a monetary reversal trend.

So what will the euro rate be in 2020? Analysts Bloomberg predict him in 2020 4% -ny growth and completion of the 4th quarter at around 1,16 against the US dollar. In addition, the onset of a period of relative political stability on the European continent (after completion Brexit).

The markets reacted optimistically to this attitude of respected analysts and major players: at the end of 2019 euro rate online (refers to the cost futures a couple of euro / dollar) updated the weekly maximum. And this is against the backdrop of improving trade and economic relations between China and the United States. 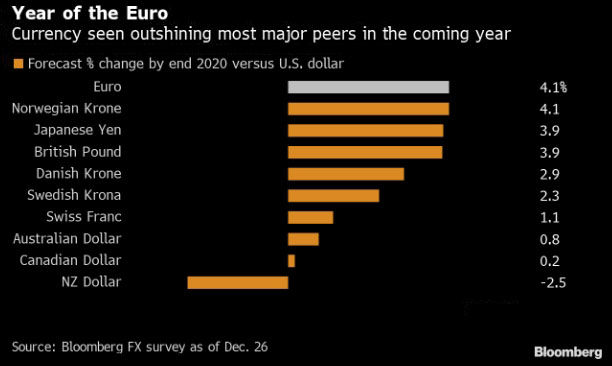 Steven Innes - strategistAxitrader Limited"- notes that the euro / dollar is more sensitive than any other trends world economic system (especially, to growth). Now the markets are experiencing an optimistic mood, which means that the euro will also soon begin to rise, following the trends of the global economy.

We will evaluate the prospects of a change of direction trend. For 12-month pair options EUR/USD risk reversal was valued at 36 points in favor of options call. This is very close to the 2-year high - 43, which was reached on December 13.12.2019, 20. At the same time, the risk-reversal within the month was only XNUMX points in favor of options call. 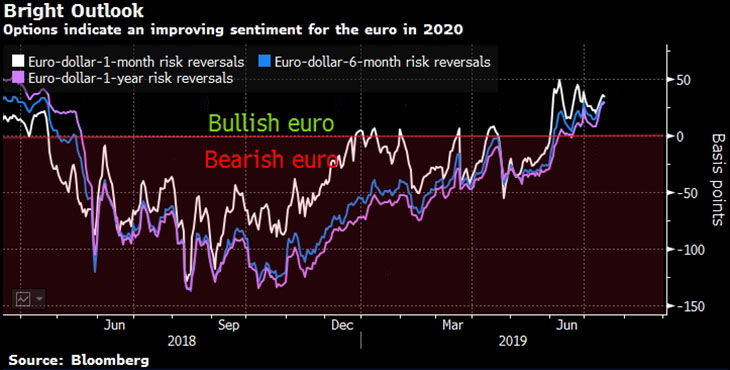 Forecasts regarding the growth of the single European currency were also received at the beginning of 2019. Against the backdrop of the fierce trade confrontation between the US and China, numerous forecasts of a “no alternative” increase in the value of the euro against the dollar converged at around 5% by the end of the year. (Instead, there was a fall of 3%).

It will be hard to say what the euro will be in 2020, even now (when the year has already arrived). The dollar turned out to be a very stable “player” while credit policy ECB rated as ultra-soft. In this regard Jens Peter Sorensen - analyst from "Danske Banking"- cautioned market participants from unjustified optimism. In his opinion, the mark of 1,15-1,16 dollars per euro is an achievable bar, but the European currency will move towards it slowly, based solely on events favorable to this movement.

Also mr Sorensen notes that the prerequisites for the growth of the euro are already present in the first quarter of this year. And it even, despite Brexit, because, firstly, the process of the economic gap with Great Britain was quite streamlined, and secondly, there are strong signs of stabilization in the world economy.

Of course, the main factor that will support the European currency this year will be the economic growth of the European Union itself. But Germany’s statistics for so long have shown an exceptionally growing trend by GDP.

However, many experts make negative assessments of the development of the US economy in the near future. Interest rates are likely to decline and, as a result, the “world American” currency will objectively become cheaper. For a couple EUR/USD it also means growth.

However, the main thing in this matter is not to rush. Obvious and confident implementation of these factors in practice may take longer than anticipated. And what will be the euro exchange rate in 2020 year, perhaps, it will become clear only in the middle of summer. All forecasts are currently of an exclusively advisory nature, and the calculations are promptly adjusted in accordance with incoming economic and political news.

How to get rich using a smartphone: choose an application

Earnings for cars online: how to find money for a car for a month

What will the dollar be in 2020? Believe forecasts?