Price quote: use in trading?

The quote is the price of a currency, security, or commodity at a specific time. Today I will consider this concept in more detail and tell you why the trader needs them. This is one of the most popular questions asked by beginners.

It is important that not only currencies, but also any other financial assets can be quoted. Quote in simple words - This is the market price of a financial instrument. If the asset is listed on the stock market, then the quote is the stock price. If the market is over-the-counter, then this is the best price available on the market (although variations are possible depending on the type of execution of the transaction, for example). 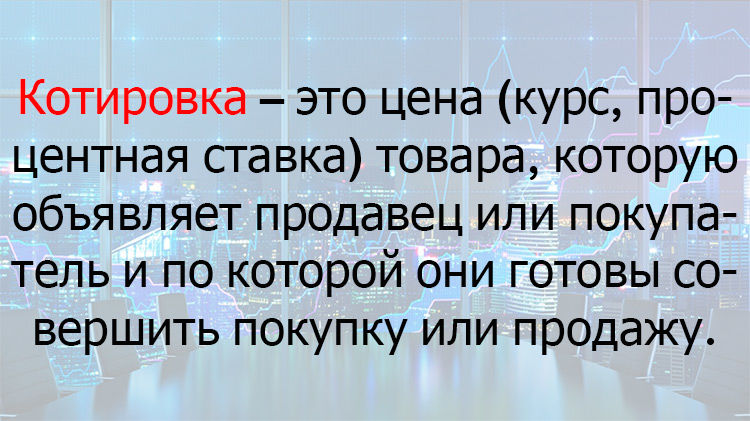 Quotes are divided into one-way and two-way. In the first case, it can be either the purchase price or the sale value of the financial instrument. Bilateral quotes indicate that one and another parameter of a currency, security, or other commodity.

Another term is official. quotation. Simple words, this is the cost of opening and closing the market, that is, the prices that were valid at that moment. It is these data and say the media, because during the day the cost may vary.

Tracking quotes deals with a special quotation commission, which is on any exchange, regardless of what assets are traded on it.

The concept of currency quotes

Everyone has heard the term "currency rate". In simple terms, this is the amount of money needed to buy another currency. In the foreign exchange market, one currency is a commodity, and the other is a means of payment. The concepts of "rate" and "currency quotation" are very close, but there are differences. So, the exchange rate is a stable value. If the value of a currency does not change within a certain time, it is considered a rate. In fact, price quotation - This is also a course, but just characteristic for a specific period. 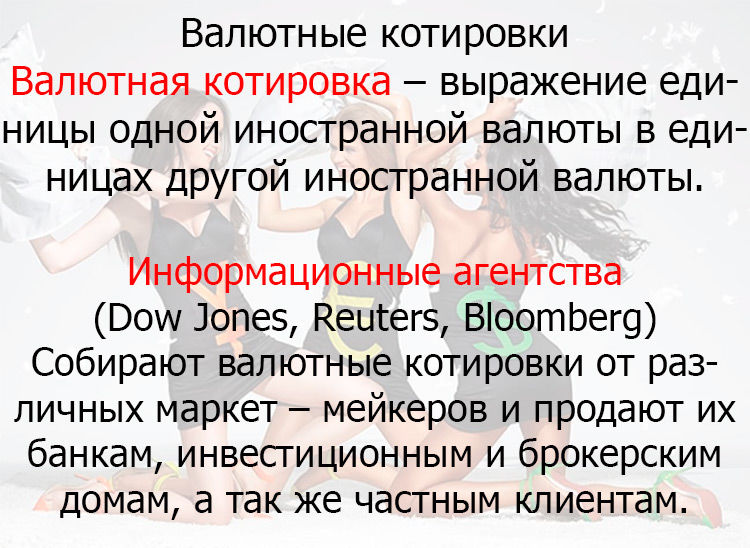 The foreign exchange market is a kind of financial market, where the only asset is currency pairs. What it is? Suppose we want to buy euros for dollars. In this case, it is necessary to trade the EUR / USD currency pair. The first asset in a pair is a commodity, and the second is a means of payment. As a rule, each abbreviation is decoded as follows: the first two letters designate the country, and the third - the currency.

For example, USD is the American dollar, UAH is the Ukrainian hryvnia, and so on.

Let us turn to the definition of what is considered a direct quote. This term means the amount of the national currency that can be bought for the base currency (which is bought, in our case it is a dollar). 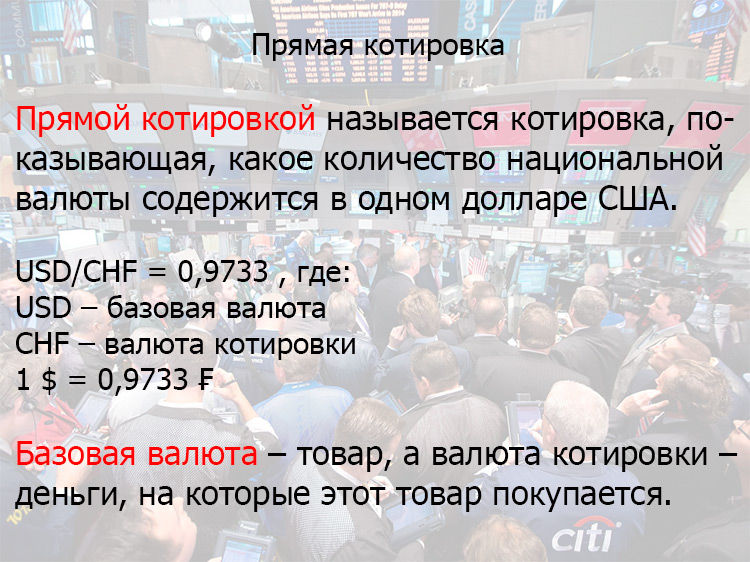 Direct courses are seen by everyone on the board next to the exchange office. In Russia, the main base currencies are the euro and the dollar, which are bought for rubles. It is in this currency that the cost of buying foreign currency is indicated. Reverse quotes are the opposite. In this case, the exchanger would offer to purchase the ruble for a certain number of foreign monetary units. In simple words, sell the dollar and the euro and buy for them the ruble.

In the case of rubles, the direct exchange rate is much more convenient for perception and calculation, since for one dollar you can buy 62 rubles. This is by direct designation. And if it were the opposite, it would look like this: 1 ruble = 0,0161 dollar.

In international currency markets, the main currency is the dollar. This is a solid monetary unit, which acts as a commodity. The quote currency is the currency for which the asset is purchased. It can be any currency.

How to get income up to several thousand per month?

Financial markets are rather unpredictable, regardless of whether a security or currency is traded there. One of the possible options for making a newbie on it is to use trading robots.

One such advisors - Abi's algorithm, which does not require programming skills to create programs for automated trading. This, of course, makes trading easier. It is important to understand that the use of advisers does not make a break-even trade. It is necessary to constantly test it on history and optimize it depending on the market situation. It requires certain skills that come with experience.

Another advantage of using Abi's robot in commerce is a web terminal that allows you to make deals from anywhere in the world and not be tied to your own computer. Many online terminals are equipped with the ability to use advisors in trading or give hints in which direction to make a deal. Again, great programs simplify the life of a trader, and in some situations are simply not interchangeable!

By registering with the robot, the trader gets access to a set of technical indicators. A technical indicator is a formula that analyzes market statistics and a component forecast with regards to its further dynamics or establishes the presence of a certain trend at the moment. Technical indicators have many options that allow you to make trading more flexible and enter into effective transactions based on market realities.

What is a reverse quote?

The topic of reverse quotes has already been addressed. If the line looks like USD / RUB, then in the reverse, the base and quoted currencies change places. Therefore, such a pair will look like RUB / USD. In the UK, the most common is such a record, where the national currency is the underlying asset.

In the international currency market (in particular, Forex), there are still pairs like EUR / USD, AUD / USD, which are reverse quotes (after all, the base currency is the dollar). 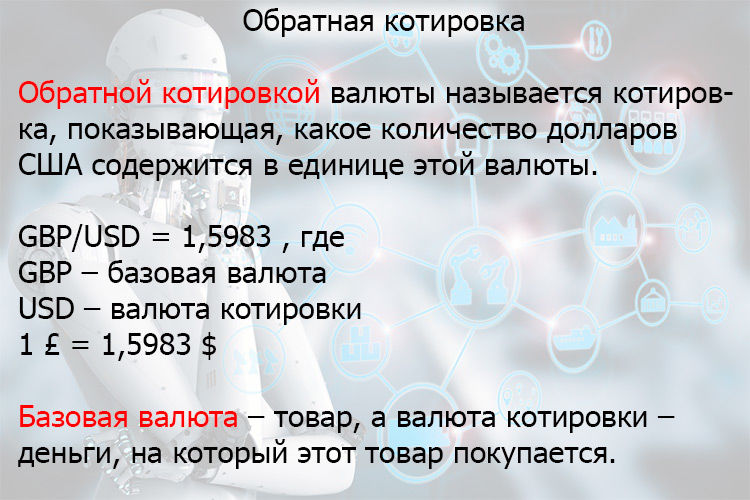 The most popular currency pairs include the dollar, the euro, the British pound, the Japanese yen. Some of them may bargain with each other (for example, the euro and the dollar), some may not. In the latter case, bargaining is carried out at a cross rate.

This is the ratio between the two quotes, conducted through a third pair, for example, a dollar.

The foreign exchange market is a bit like a regular one, where meat, milk and bread are sold. Here, too, there are buyers and sellers. The last are private traders and large players (state and commercial banks), called market makers. It is they who deliver liquidity, providing quotes on the Forex market.

Buyers are other banks and traders. Another name is market users. The largest participants, of course, are banks. Therefore, the market created with their help is called interbank. This is a network of buyers and sellers using various technical tools.

Quotes can be indicative and real. The first indicate the value of the tool only approximately. For example, on some site the trader saw information that a dollar can be bought for 60 rubles. But far from being the fact that for this amount it can really be purchased. Real price quotation is displayed in the bank, and currencies are bought or sold directly through it.

If assets in the stock market are traded, the value changes every day. The most popular securities are stocks and bonds. The first ones confirm the ownership of the company's shares of the person who purchased the share. Bonds are a contract according to which a person lends a portion of funds under a certain percentage for a period.

The value of the bond is entirely dependent on par. This is usually a percentage of this amount. Stocks also have a rate that is reported by a broker.

Quotes of goods on stock exchanges

In addition to the stock and currency exchanges, there is also a commodity, which sells precious metals, oil, timber, and so on. Items sold here must be entered into a special database. Every product sold here also has price quotation, which is largely influenced by the exchange.

It has an information base, where there is information about the ratio of supply and demand of goods. It also indicates the price, which is used by market participants for trading. Of course, there may be fluctuations, but they are small. Therefore, on the exchange quotation is price of goods, exhibited by the exchange.

The cost of the goods serves as a kind of guideline, allowing to determine the cost of oil, timber, precious metals and other assets. This product is removed if it does not match quotation. Simple wordsThe exchange serves as a regulator of trades whose task is to stabilize price fluctuations. On the over-the-counter market, quotations can vary within very wide limits due to the fact that the price there is in free navigation, and the goods are from each other at a considerable distance. Quotes on the same exchanges say exactly what is happening on the market.

Of course, lucrative deals will not happen every day. It is necessary to develop trading skills in order to learn to see them at the moment and to predict their advance in the future. Usually, a novice sees cool post factum setups. Also, successful signals can be formed at times when trading is not allowed: before the market closes or the release of important news.

In order to prevent such unpleasant situations, you can use the services of trading robots. Abi - A very good option.

If you take a responsible approach to trading in financial markets, you can earn very well.

Forex, binary options, CFDs are all a good opportunity to improve your financial situation. It is important to trade according to the strategy, to be responsible for choosing a broker and to have your head on your shoulders. Then the trade will go fine. The quote is The main basic tool for analyzing the financial market.

What a timeframe is and its role in trading

We need money: how to quickly increase funds

Adidas and Puma history: how brands were created