People increasingly rely on robotic systems, in terms of exchange-traded asset management. I think that in 4-5 years bots advisors will be able to take a significant share in the segment of consulting services. However, many countries are still "slow down" in the development of robot capabilities. It is related to aspects of traditional culture, as well as with the technical realities of specific national exchanges. I decided to look in more detail at this point.

First of all, I have learned, what they think about the development of the situation authoritative analysts. New York news site Business Insider predicts a significant increase in specific gravity of assets under management (AUM) of robots in 13 whole time. So, if in 2016, the amount of capital is 600 billion dollars by the year 2020 designated amount of 8 trillion. Impressive figures and more revealing, it looks at the table. 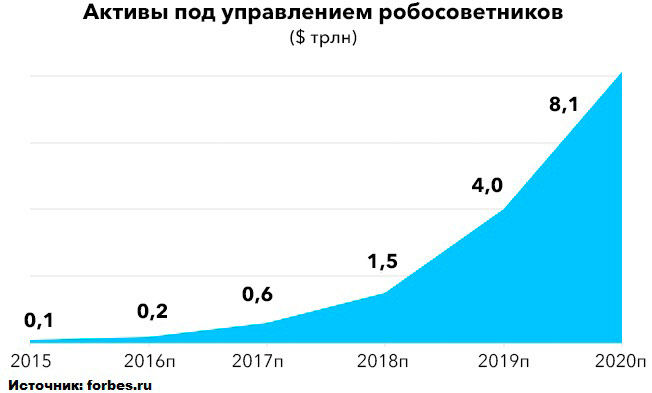 However, it turns out that things are not all the same. The leaders were the United States, which foreshadowed an increase in the proportion of AI in asset management to 5% in the entire market. Such indicators of democracy could reach as early as the same year 2020. This was clearly evidenced by the data the US as a consulting firm AT Kearney. The leaders were 5 robots advisers, asset managers totaling 44 billion dollars: Vanguard, Schwab, Betterment, Wealthfront and Personal Capital. In another article I wrote about the management of investments in the field of binary options automatic robot Abi, which copes with its duties no worse than the above-mentioned fund systems. For the forex market and cfd / crypto - Forex-Lady. Anyway, a comparative table of asset allocation between robotic managers clearly shows who is the leader now. 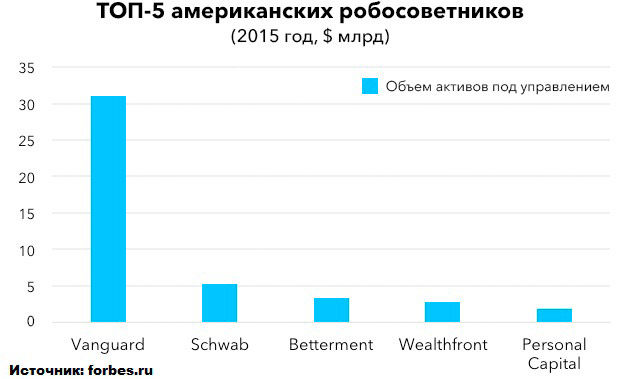 However, as it turns out, not in all Anglo-Saxon countries, the robots are as good as in the US. So, the leader of the British TOP of artificial adversaries Nutmeg concentrated in its "hands" only 750 million dollars, and the total amount of capital under the control of robots in the UK is located in the mark of 6,5 billion. Not so much, if you compare with the Americans. A little better than the British, things are in the Middle Kingdom. Chinese investors trusted robots 27 billion dollars. In Russia things are completely bad. Thus, Russian traders seem to prefer self-trading, since robotic systems manage only 12 million US dollars. I will give a complete comparative table.

Why was such a disparity by country?

I decided to study this question as carefully as possible. The first thing that should evidently immediately strike the eye is the general level of development of a particular national market. For example, American giants-regulators NYSE and NASDAQ place on their sites warrants for trade for 4,5 thousand companies, with a total capitalization of 25 trillion dollars. On the London Stock Exchange, shares of almost 2 000 companies are traded at 7,5 trillion. But on the Moscow Stock Exchange business is "worse" - the capitalization is 400 billion dollars for 250 companies. More clearly see the size of the stock markets of specific countries can be found in the table below.

As you can see, the table shows quite objective realities. However, there are other factors that significantly influence the situation. They are rather social or even psychological. I decided to compare the number of participants in the Russian and American markets. In this I was helped by the calculations of the analytical agency Bankrate, according to which almost half of American adults own shares and other securities. This is considered a small value, because if you compare with the use of coffee, it is drunk more than 60% of adult citizens of the United States. The number of securities holders in Russia is estimated at a maximum of one and a half million people, which can not be compared with the figure of 125 million Americans.

To explain this situation I can purely historical - financial literacy in America has long been at the forefront, and the people from childhood are interested in profitable investments. In Russia, the market economy is only just starting to gain momentum and is still considered the economy "in transition". Hence, the gap in the public mind with respect to shares, bonds and other similar assets.

I can say with confidence that market regulation is undergoing long evolutionary processes that allow exchanges to adapt to changing conditions. For example, in the United States there is the term Internet Advisers, which refers to all counterparties that operate exclusively through the Network. In relation to such organizations, there are rules that greatly facilitate their lives. First of all, this is a convenient and simple registration, which does not require any serious investment. This allows Internet managers to easily enter the market and experiment with innovations. A "live" example is robot consultants. Secondly, the US Securities and Exchange Commission legislated this provision in the 2003 year, which gave time to innovate properly. I note that regulators in other states do not have such "benefits", that they do not benefit them in any way.

All right, with Mother Russia everything is clear and its lag behind the titans of the market is due to objective historical and economic reasons. But what about China and Britain? The issue with the United Kingdom is especially interesting, because he and the United States seem to have a lot in common. It turned out that this is not so. And this is where the economic traditions come into play. I have already shown you the table of the leading robot advisors in the United States. Knowledgeable people of their names will immediately be told that the owners of the systems are the whole of the investment management corporation. Yes, they have been working for a long time as "live" consultants, but deftly experienced where the wind blows and developed their own robotic advisers. And if they did not, they bought ready-made versions.

In the UK, and in Europe as a whole, things are quite different. There are no major players in the investment management markets. In Britain, the industry rests on individual financial advisers, who work "for themselves" without creating a single serious conglomerate. In other parts of the Old World, in addition to private consultants, such services are provided by institutions of the banking sector and insurance companies, which differ in a slow "reaction" to innovations. In China, besides the same reasons that are typical of Europe, there are also features of a national character: investors distrust private advisers, and electronic systems - especially. They are more likely to be interested in these issues from people they can trust - ask their families, friends, colleagues.

I summarize. As I already wrote, robots have great potential and through 5 years will take a serious position in the stock markets. Obstacles can be created the existing infrastructure of national exchanges, which will have to be changed to meet the requirements of investors in terms of technology. In addition, we must not forget about traditional attitudes and cultural aspects. I think that is still a relatively long time robosovetniki be securely fastened with a "live" financial advisors.

The decision on interest rates Fed

Money out of thin air in the binary options

Algorithms for automated trading on the binary options