This is the final article in a series of articles, how to trade currencies. In this article you will learn how to trade binary options on the Swiss franc.

The Swiss franc is legal tender in the territory of Switzerland and Liechtenstein. Swiss frank It has an international code CHF And is shortened by?. This currency is quite popular among traders, it occupies 5 place among the most traded currencies, in its slang traders call the franc "Swissy".

Paper money issued by the National Bank of Switzerland, and the coins were minted swissmint.

The functions of the central bank of Switzerland It performs the Swiss National Bank. It has several headquarters, branch and representative offices in different cities of the country. At the head of the bank is bank council and board of governors. Bank Council consists of 11 people who are appointed by the Federal Council and the Shareholders' Meeting, they oversee the work of the Swiss National Bank. The Board of Governors consists of 3 members (chairman, vice - chairman and member of the Board), each member runs one of the three departments of the bank. The bank defined in Article Swiss Constitution.

The challenges faced by the Swiss National Bank:

1. Monetary policy of the National Bank is to serve the interests of the country. The bank must ensure price stability and to take into account the development of the economy. Through this it must perform the required tasks:
- Provide franc liquidity in the financial markets.
- Ensure the distribution and production of banknotes.
- Ensure the functioning of cashless payment systems.
- Manage foreign exchange reserves.
- Ensure the stability of the financial system.

2. However, the Federal Council to participate in the international monetary - financial cooperation.

3. Acting on behalf of the competent federal authorities providing services to the Confederation.

Swissmint minted coins for the government. Number of issued coins is agreed between the Swiss National Bank and the Federal Department of Finance. 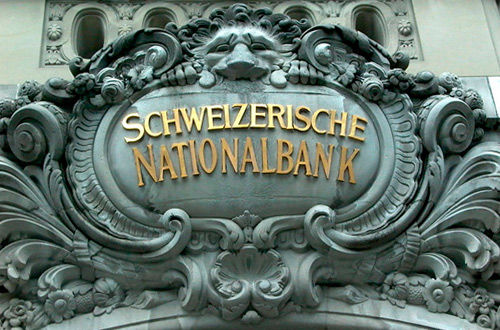 Switzerland applies the regime of freely floating exchange rate for its currency. As well as this country is the fourth largest custodians of gold in the world. Earlier in the constitution of this country has been registered to the national currency has been provided to 40% gold reserve. Now this provision in the Constitution is not, but the relationship between gold and the franc is deeply rooted in the minds of investors. Today franc It has 80% correlation with gold. Hence the high probability that if rising gold, the Swiss franc will continue to grow. You can check this by comparing the gold and the franc on my live chart.

As investors consider gold a form of "safe haven" for capital, the Swiss franc remains in scoring with an uncertain economic and geopolitical situation in the world.

According to the news of the economic calendar, I recommend not to trade in Switzerland, often the market simply does not react to this news in any way. Very much to influence the course can only news from the Central Bank of Switzerland. Suffice it to recall 15 January 2015, when the National Bank, unexpectedly for all, announced the abolition of the currency threshold to the euro, which lasted from 6 September 2011 and was set at a rate of (EUR / CHF not lower than 1,20). This news provoked an unprecedented increase in the franc, up to 20-30% to all world currencies. Because of this a number of financial institutions have recognized themselves as insolvent before their clients. Traders still remember Alpari UK, American FXCM and New Zealand Excel Markets.

This currency is the most volatile during the European session. See exchange rates with Frank, you can live on my chart. Use heat map, see the pivot point, using all methods that help you to earn! Use every opportunity to earn money!

Do not forget to check out:

Additional features of the trading platform