A reliable broker, online signals and a robot!
Better together than separately!
Start earning money
LINK

This indicator live schedule for binary options It is a modification of a number of other indicators, namely On Balance Volume (Obёma- balance indicator OBV) и Index Accumulation / Distribution Williams. On Schedule Live can be found at the following address: 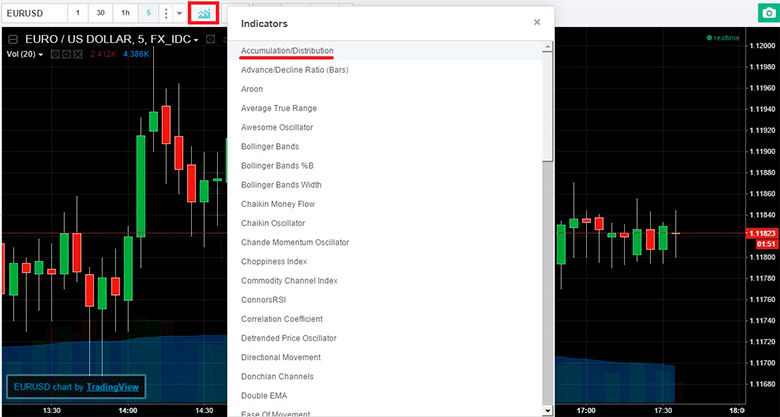 In general, Indicator Accumulation / Distribution (hereinafter I will cut it as A / D) was developed Chaikin. I'll tell you an interesting story behind it. Since the indicator was invented by accident.

As I mentioned, it was based on:

While these opening and closing prices published in the newspapers. And for the calculation of indicators, traders took the data from there. But one day opening price ceased to be published. And Chaikin had nothing to do, how to add a formula Williams average price. The best solution at the time was not. That's the story.

You know, Indicator Accumulation / Distribution quickly became popular. At the beginning it was used for Technical Analysis value of the shares. But now it is used for the analysis of currency pairs in the binary options. And this live graphics display served as the basis for the next invention Chaikin - his eponymous Oscillator (but more on that in the next article).

On the Live indicator chart A / D It is displayed as one curve. 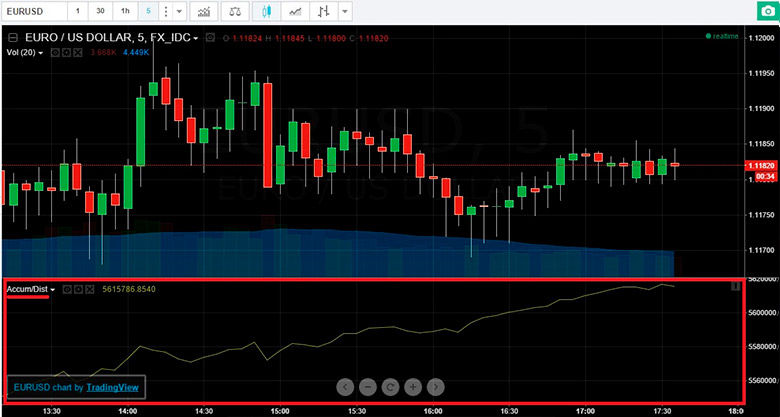 ; when the LED A / D goes down - you can open the option for a fall

. But! I do not recommend using this indicator is binary options on their own. Rather, it will confirm the trend. But it's better to configure it in conjunction with other tools.
More there is a situation when an asset moves in one direction, and the light - in the opposite direction. This is called divergence. It says that will soon be a reversal of the market. If the value of an asset moving up - you can expect a further fall. And vice versa.

There are several options for applying this indicator in practice. But the most effective and popular of them is the divergence, which is characteristic of most of these tools. It lies in the discrepancy between the values ​​of the price and the indicator readings. Its appearance suggests that soon there will be a reversal in prices in the opposite direction.

Among the obvious advantages should be highlighted simplicity and ease of use. It can be used on any timeframe and currency pairs.

But the disadvantage is that in most cases, the Accumulation / Distribution indicator allows you to work only during a divergence, which occurs quite rarely, especially on higher timeframes. This can cause difficulties for beginners, since not everyone can recognize the divergence on the chart from the first time.

Experienced pros have revealed a pattern in which this indicator demonstrates much more effective results when dealing with the securities market. It is in working with stocks that you can see the exact volumes, that is, you can see how many shares are being sold and how many are being bought.

You can also try to use it in dealing with the commodity and raw materials market, namely with gold and silver.

The indicator for binary options volume

How to use the Vortex indicator in trading

Signals on Indicators for indices