Feedback from real traders about the official site of binarium

Now the network can meet many new enthusiastic comments about the company Binary. I do not quite understand what they are connected with. Most likely, with the fact that at the end of last year the broker completely updated its trading platform. Apparently, to attract new customers, he himself began to pay for and spread about himself a bunch of positive reviews in all the well-known trader forums.

I decided not to endure for a long time and express my honest opinion about this unscrupulous company. I contacted her two years ago, I was badly burned, lost my money. Well, in order not to focus only on my problem, I decided to find other evidence of poor quality of the company's address to clients.

Negative feedback, I collected only the latest, which are relevant at the time of writing the review in 2018 year. 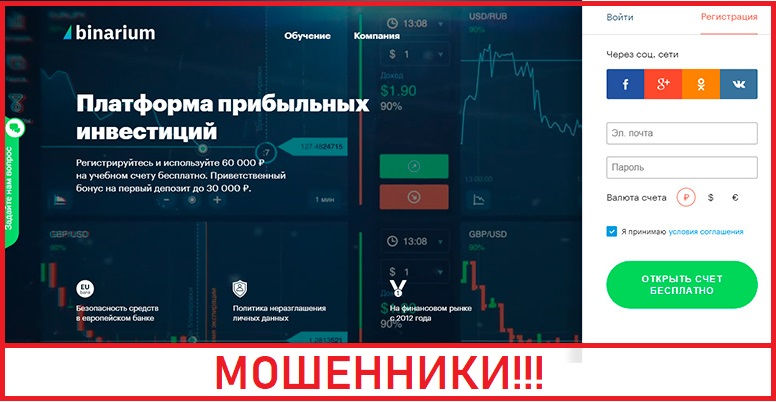 This is the official website of this deceiver. At first glance, it seems that this is a worthy company, in which it is worth investing your money for the sake of additional income. But in the end you will not earn it, but Binarium and all his obsessive managers.

Yes, they have updated their trading platform, but the past jambs with hanging and slipping have not disappeared anywhere. It would be better to change the filling, but not the cover!

Not quite convenient trading conditions. It seems that they were specially created to ensure that inexperienced beginners only so merged their deposits. 600 rubles as a minimum deposit still far away, well, but the rate is too high. I'm not talking about the fact that such a situation is not in mani management. "Good" managers specifically made sure that you merge your deposit at first. After all, this is what the broker Binaryium earns. All normal companies make their trading conditions within the framework of a clear rule of money management - a bet no more than 5% of your deposit. Here everything is completely different.

Now I will tell you about the hidden problems of the broker, which faced many customers, including myself. The forums I communicated with other traders, and we all agreed that this is not a worthy company that has been before. If at all it was!

Unfortunately, I recently noticed such a sad tendency that many brokers began to slide into the abyss. In the first years they really were leaders, made comfortable conditions for their clients. Well, after they have built themselves a sufficient client base to become rich, they turned into open swindlers. For example, many companies began to openly chemize with yields on options. A minute ago, it was 80%, and now 10%. After a couple of minutes, she again jumped to 80%. This began in Binaryium.

I wrote many times in their support, to which I was told that the situation on the market had changed, so the yield changed. Are you normal at all? For this minute, nothing happened on the market, especially to reduce the yield from 80% to 10%! I'm still not a fool, and I have some experience in trading in financial markets. And I know that this is done specifically to prevent traders from earning money!

That's what you should pay attention to now. In many forums these problems with Binary are discussed most often:

• Ukrainian citizens can no longer register and trade on this "wonderful" platform.

• If in past years the broker had a license from the Russian regulator of the CROFR, now it has already expired. And, it seems, the company is not going to renew it. Well, if there is no regulator, the broker can do whatever he wants. What exactly is he doing now?

• The updated trading platform has a lot of jambs and flaws that interfere with normal work for traders.

• Well, in the regulations there was an additional point 5.7, in which the broker can unilaterally block the account and trading account of any client!

As for the first point, from 2018 on the platform access for citizens of Ukraine, Israel and the USA is closed. For me, this factor is not very important, since I am on the territory of the Russian Federation. Well, for many traders it will become an extremely negative moment. They will just have to look for another broker. Well, well, since you need to quickly withdraw their funds from this fraudster! Such a decision is connected with political tension between the Russian Federation and Ukraine. 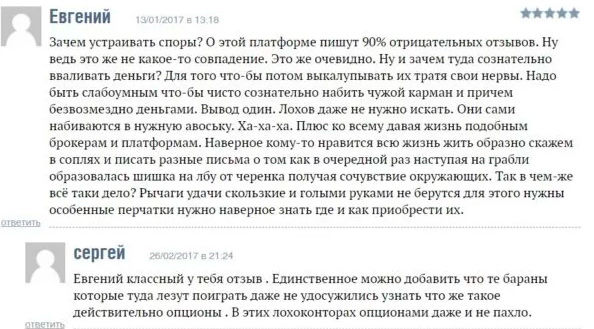 Go ahead. The abolition of the license means it already speaks volumes! And for the most part in a negative way. Since the beginning of the last 2017 year, a license from the Russian CROFR regulator has ended. But Binarium still has not bothered to extend it. Hence, she no longer worries about her reputation, since all worthy competing companies always do it first.

I have another suggestion about this. The license costs a lot of money. And not every second-rate company can afford it. Apparently Binarium has serious financial difficulties. Which again speaks of her poor solvency. Well, if so, then it is worth considering whether it is worth cooperating with her at all. After all, such an alignment can even lead to problems with the withdrawal of money. An insolvent broker will not withdraw the deserved profit of its clients at all.

On one of the forums, I found such an answer from the technical support service to one of the clients' questions regarding the lack of a license. In my opinion, this is pure water of excuses. And this user in his comment clarified that the broker had not specified the exact terms of obtaining at least some license.

To somehow stay afloat, last year the company decided to completely update its trading platform. Yes, they made it very beautiful, stuffed with numerous built-in indicators. Although, in my opinion, this is still not enough for a full-fledged technical analysis.

But even after many users started complaining about the numerous technical problems, hang-ups, slippage. Moreover, after the upgrade, it became completely inaccessible to trade under Long-term, One Touch and Touch contracts.

That is, the company encourages its customers to short-term trading on turbo options. Which, I recall, very risky. It's more like gambling than worthy and serious trading. But here, too, Binaryium was laid out specifically! Traders who trade in the scalping strategy should open trades at lightning speed. After all, their future profit depends on this. Well, on the new "super" platform of the Binary broker, deals in 80% of cases open with a very strong delay! And how then can you succeed with such terrible trading conditions? 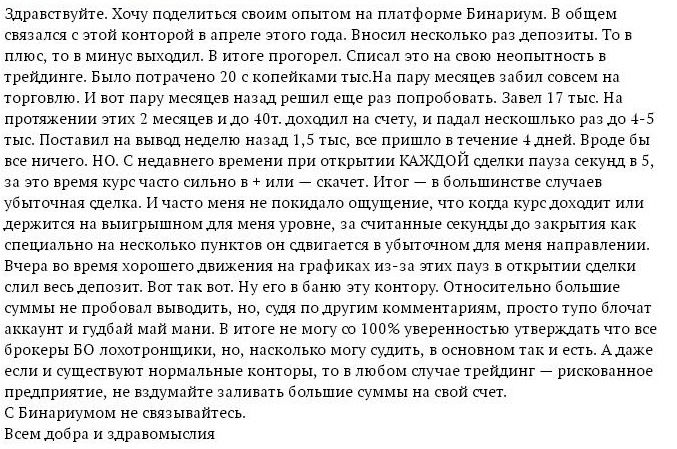 Well, above, I found evidence of the terrible work of this trading platform. You see, people just lose their money because of constant delays in the turbo contracts! It's even outrageous! How in general after such there still there are clients? There are so many worthy companies around that offer much better trading conditions than this kitchen scam!

Technical support does not justify such hangs and refers to the fact that this is normal. According to them, this happens periodically in all other trading platforms of brokers. Well, I really do not agree with them, because I also traded on other platforms. And I did not see anything like that! The company's specialists are starting to shift the blame to the Internet. They say that the client connects more high-speed Internet, as they say, this is the reason for the hangs and delays. 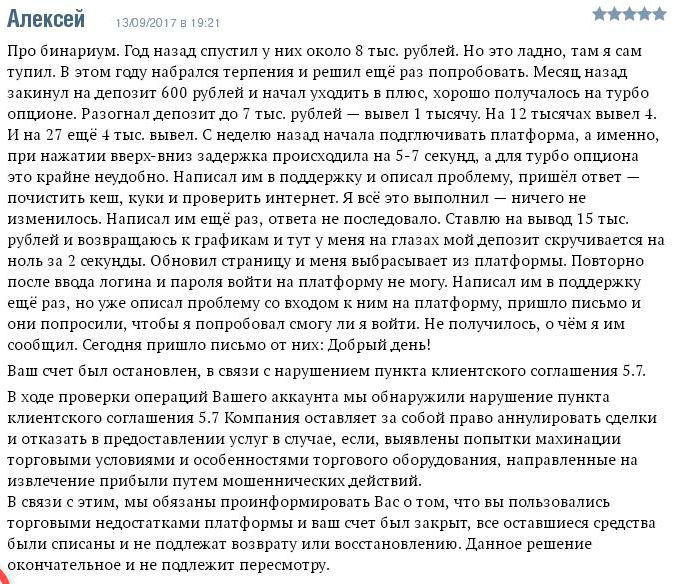 Such negative feedback in the network is complete. You can see for yourself. People trust their finances in this "kitchen", and then not only can they not earn due to the constant problems in the technical platform, but the company does not withdraw money at all!

Speaking of this. Of the latest innovations also want to note the new "wonderful" item 5.7 in the Company's Regulations. As part of this agreement, and it taught Binarium Security Service can unilaterally block your account to cancel all the transactions and profits, well, your own deposit will be transferred to the broker's account. In other words, they will just take your money! This is stealing clean water!

On one of the forums, I found confirmation of this. It turns out that such a point was specially introduced for successful traders! If you start to achieve success, the company sees it, and that in the future will not fail due to these successful traders, they simply refer to point 5.7, take all of your money to them, and thus also begin to accuse you of cheating and fraud against the broker! Allegedly the client started to use prohibited software, and that's why he started making money.

Believe me, the same will happen to you. If you are a successful trader, then you need to bypass the company. She simply will not let you earn, will block your money, take them from you and transfer to your account. And at the same time, accuse you of fraud! I personally will never contact such fraudsters, and I will conduct an active fight against them in all other forums. I want people to know the truth about them! Let us together help to bankrupt this fraudster, because while he exists, naive newcomers lose their money!

Well, here's another proof that the company refuses to withdraw money to successful customers. And they are unlikely to get them, since the company has now become an 100% fraudster! If earlier it offered good trading conditions, now it became a real fraud. Since 2017 years they have changed for the worse trading platform and self regulation, in the course of which they may at any time, unilaterally and without any right of appeal to steal your money, transfer them to your account, and block your account.

Well, since he does not have a license, then at all clients will not be able to compensate their damage. Moreover, they even have nowhere to go for help! One gets the feeling that Binarium living out the last days, and this time they want to cheat even more customers and take their money to developers later this "kitchen" could bask somewhere warm offshore.